How can we help you today?

If you have a Shopify eCommerce site, you can integrate the site with Infoplus. When an order is placed on your Shopify site, use Infoplus to fulfill the order. Then export inventory levels from Infoplus back to Shopify. Everything happens in real time. Customize the integration based on your site and setup needs.

Connecting Infoplus to your Shopify Site is a 4-step process:

At this point, the Infoplus App will now show up in the Shopify administration site as an installed app.

When the Shopify connection was created, Infoplus created default Carrier Mappings. Review and add/edit Carrier Mappings as needed. For example, Shopify may name a Carrier UPS Next Day Air. Infoplus names the same Carrier UPS-1 DAY (UPS - 1). These names need to be mapped in Infoplus. Once mapped, when an order is placed in Shopify using the UPS Next Day Air Carrier, Infoplus knows to use the UPS-1 DAY (UPS - 1) Carrier.

For the connection you can set which warehouse, if there are more than one, that Inventory is synced from.

In Shopify, Choose which Products Should be Fulfilled by Infoplus

For each product you want Infoplus to fulfill, complete these steps in Shopify.

NOTE:  Infoplus expects each SKU to be unique within Shopify.  If more than one product is set up with the same SKU within Shopify, unpredictable behavior may occur. set to Infoplus.

For each product you want Infoplus to communicate product inventory levels to Shopify, complete these steps in Shopify.

NOTE: The "Sync Inventory" field in the Shopify Shopping Cart Connection record must also be set to "True.

The process to connect Infoplus to your Shopify site is complete!

Once connected, you may want to turn on Shopping Cart Alerts in Infoplus. This lets you see messages that Infoplus receives from Shopify (i.e., if an error occurred).

Here's what happens after connecting Infoplus to your Shopify Site: 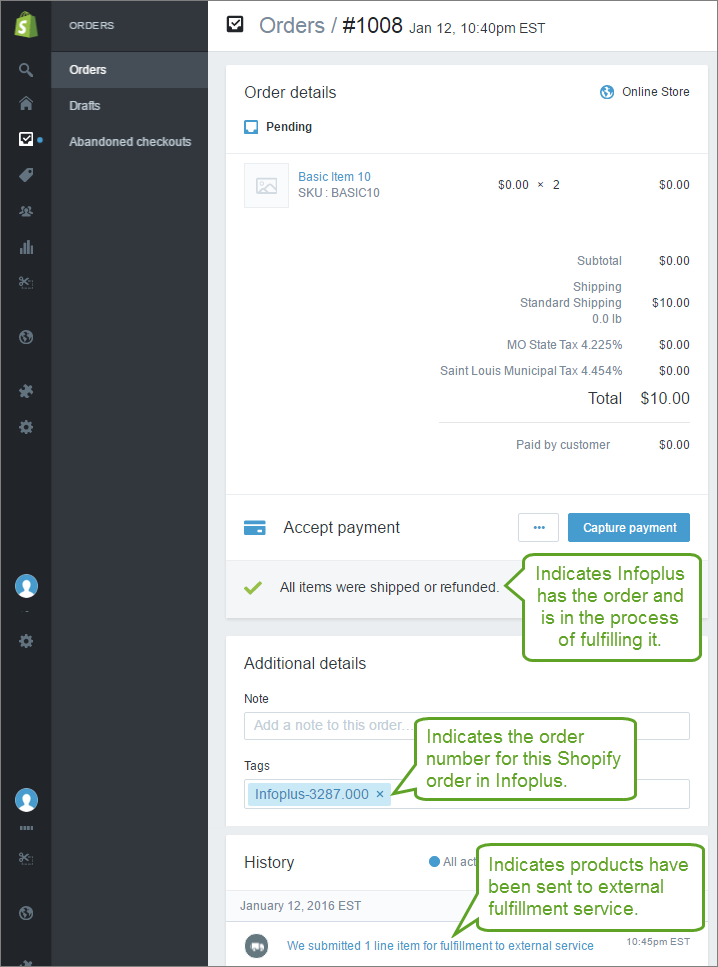 NOTE:  If original order is unshipped and a new label is generated, updated tracking is lost and not sent back to Shopify.

When attempting to push inventory levels from Infoplus to Shopify, the following errors are received in the alerts table:

Invalid information was sent to the shopping cart. Infoplus received the following response '{"errors":["An item cannot be active at more than one location if one of them is a fulfillment service location."]}'.

Invalid information was sent to the shopping cart. Infoplus received the following response '{"errors":{"base":["None of the items are stocked at the new location."]}}

When Infoplus communicates with Shopify, via its API, to either update inventory levels or to mark an order as fulfilled, Shopify requires that a location id be specified to determine in what location the inventory level should be adjusted.  When using the Infoplus plugin, a "pseudo-location" is created within Shopify, which Infoplus will use as this required location value in its API requests. For this to work, all products for which Infoplus will be managing inventory, should be marked as such on the Shopify product setup page.  By doing this, products in Shopify will move to be in the "pseudo-location" of which Infoplus is aware. When items are setup to not be managed by Infoplus, but the Infoplus connection is setup to manage inventory, the location Infoplus will use in its API request will not line up with Shopify's expectation.  As a result, errors are returned by API requests to update inventory or fulfill orders. To fix this problem, set each product to use the Infoplus Fulfillment Service within Shopify. This can be done on a product by product basis or for all products in Shopify using Shopify's bulk edit tool. 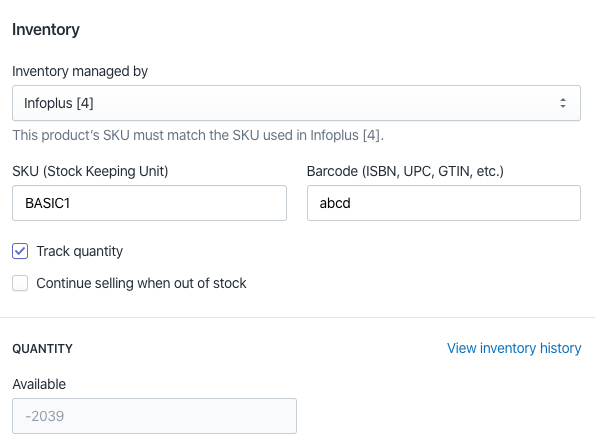 When a product within Shopify is set to have Infoplus manage inventory, quantities can no longer be manually adjusted within Shopify, and all of that product will exist in the Infoplus "pseudo-location". Some users, however, do not want Infoplus to track inventory, but still want Infoplus to mark orders as fulfilled.  As stated above, however, if the products are not marked to be managed by Infoplus within Shopify, Infoplus will be unaware of the location where they actually exist in Shopify.  Even though Infoplus will not update inventory levels, when it tries to mark orders as fulfilled, the same error will occur.  To alleviate this problem, there is a field on the edit screen of a Shopping Cart Connection record labeled "Override Location Id".  In this field, a non-Infoplus location can be entered, and if this field has a value set, Infoplus will use that location value instead of the 'pseudo-location' when communicating to Shopify.  The caveat to using this feature is that all items that Infoplus will be shipping must reside in the same non-Infoplus location entered in the "Override Location Id" field. This field will appear only if Shopify is selected as the "Connection Type". 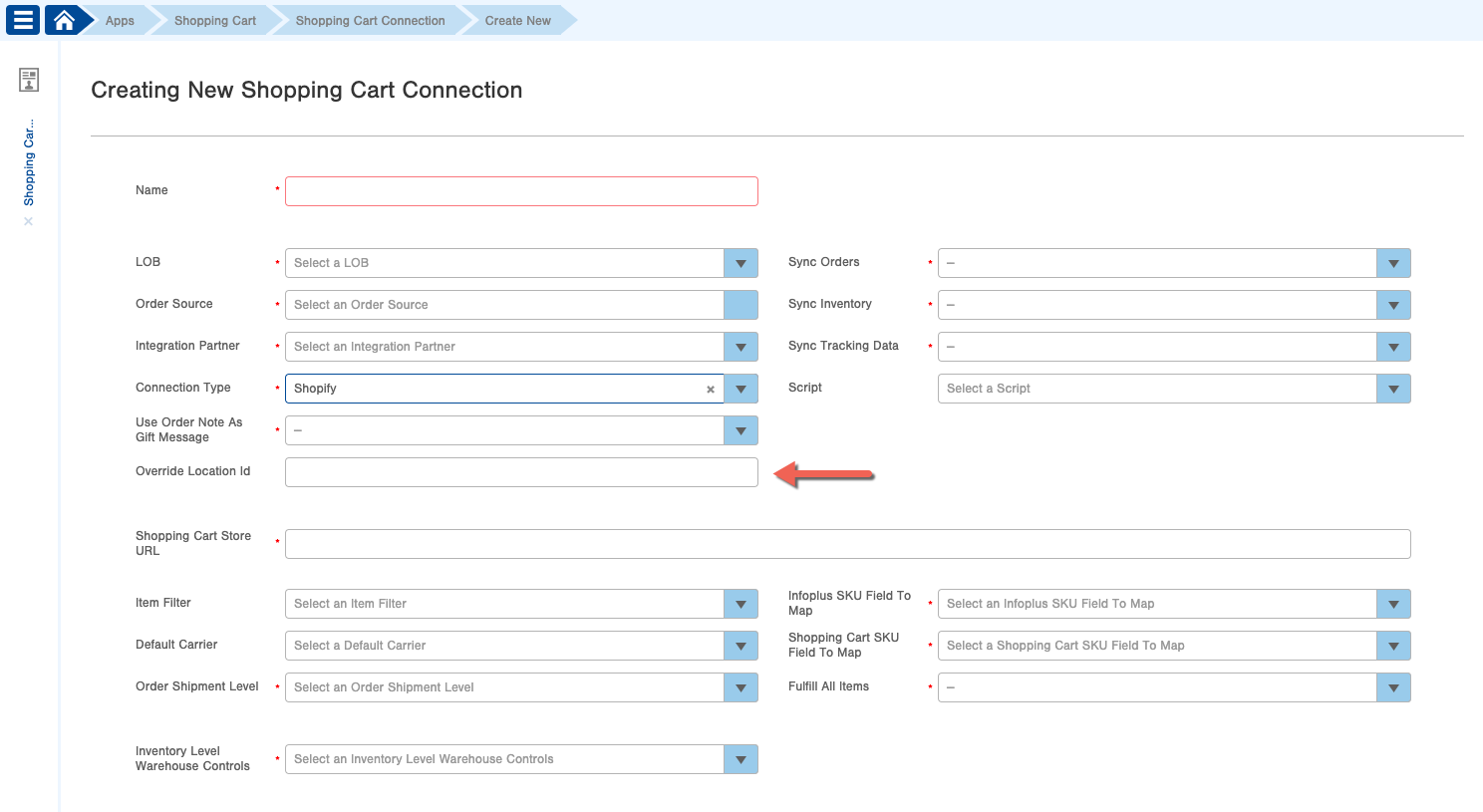 To find a location id within Shopify, from within the Admin section of your Shopify site, click on the Settings link in the lower left corner of the page.  Next click the "Locations" link and choose the Location that has the id for which you are searching. The URL in the browser should now contain something that looks like:

When attempting to import an order from Shopify, the following error is received in the alerts table:
An unknown HTTP Error was received '504' connecting to URL 'https://your-shopify-site.myshopify.com'

Orders are not pushing shopping cart updates, even after pushing manual updates and even if the Shopping Cart log says it successfully pushed the update. The Shopify side still is not showing that the order is shipped.

This is another instance where all items in Shopify must have the same location id. This is the only accepted configuration for Infoplus to communicate with Shopify.

The location ID associated with the Shopping Cart Connection in Infoplus is 48335290534. All three numbers do not match which is consistent with the above error. Infoplus cannot find items that do not match necessary

Did you find it helpful? Yes No

Send feedback
Sorry we couldn't be helpful. Help us improve this article with your feedback.